After having been educated at Charterhouse School in Surrey, Baden-Powell served in the British Army from 1876 until 1910 in India and Africa. In 1899, during the Second Boer War in South Africa, Baden-Powell successfully defended the town in the Siege of Mafeking. Several of his military books, written for military reconnaissance and scout training in his African years, were also read by boys. In 1907, he held a demonstration camp, the Brownsea Island Scout camp, which is now seen as the beginning of Scouting. Based on his earlier books, particularly Aids to Scouting, he wrote Scouting for Boys, published in 1908 by Sir Arthur Pearson, for boy readership. In 1910 Baden-Powell retired from the army and formed The Boy Scouts Association.

The first Scout Rally was held at The Crystal Palace in 1909, at which appeared a number of girls dressed in Scout uniform, who told Baden-Powell that they were the “Girl Scouts”, following which, in 1910, Baden-Powell and his sister Agnes Baden-Powell formed the Girl Guides from which the Girl Guides Movement grew. In 1912 he married Olave St Clair Soames. He gave guidance to the Scouting and Girl Guiding Movements until retiring in 1937. Baden-Powell lived his last years in Nyeri, Kenya, where he died and was buried in 8th January 1941. His gravestone bears a circle with a dot in the centre “ʘ”

The Day of January 8th

this day celebrate the connection between Scouting and our faith-based chartered partners. Some Scouts and leaders will honor these days by wearing the full field uniform to worship services. In other units, a worship leader presents religious awards to recipients. In still others, the pack, troop, crew or ship conducts a service project that benefits the religious organization. this Scouts’ Day or Guides’ Day is a generic term for special days observed by members of the Scouting movementthroughout the year. Some of these days have religious significance, while others may be a simple celebration of Scouting. Typically, it is a day when all members of Scouting will re-affirm the Scout Promise.

Whilst “scouting” for pictures of the Boy Scout Memorial for the last post, we came across this picture of Lord Robert Baden-Powell (and wife Olave’s) gravestone. Note the circle with the dot inside; ostensibly this is the traditional Boy Scout trail sign for “I have gone home.” The creator aspect of Ra, symbolised by the sun at mid-noon, was in ancient times known as Aten. Aten was written as a dot enclosed by a circle in Egyptian hieroglyphics. The monument incorporates the Aten-hieroglyph by allowing the sun to shine through an aperture in the sky dome. Looking upwards at mid noon, the aperture is visible as a backlit dot inside the circular sky dome. At 12:00am on 16 December the sun is projected as a disc-dot onto the cenotaph stone. Looking down from the top dome, the floor aperture in the Hall of Heroes is once again seen to encircle the disc, as the sun’s rays strike the cenotaph stone. Moerdijk’s message as implied by the interior design is: through exodus out of the British Cape Colony, God has created a new African civilization inland.

Taking that quote out of order we see that:Based on Moerdijk’s reference to the watery floor of the Hall of Heroes, as well as his statement about old Egypt, the opening in the water-floor can be identified with the watery abyss, as in the creation theology of ancient African civilization. Rising out of this watery abyss, was the primeval mound, the Benben stone.

And:Via the sun, heaven and earth are simulated to be visibly connected through a ray of light. It should be remembered that B-P first made a name for himself as a hero of the Boer War at Mafeking in South Africa. Another coincidence for us is that this monument, as described in the quote, would appear to symbolize the regeneration of the Boers as they forged a new nation for themselves. This idea of regeneration was also mentioned in the context of the Boy Scout Memorial (see comments), which led us to the picture of the B-P grave, whose hieroglyph reminded us of the Voortrekkers and now back again to the Scout Memorial. Full circle. Voortrekkers, incidentally, means “those who trek ahead.” Like say….Scouts, or, as they’re known in much of Europe, Pathfinders. In the Netherlands, Scouts 18-21 used to be called Pivo’s, an acronym for (Pionier(st)er/Voortrekker Ranger/Rover).

‘I have gone home’ , “Gone home” is a Scouting symbol when someone has passed away. For many generations before ours, trail markers were used to safely guide travellers in the right direction while on the trail. One had to keep a keen eye, as trail markers could be many things; arranged stones, sticks or grass, plumes of wood smoke or carved markers in trees. There are many variations throughout the world, with some adapting their own marks to suit their environment, and themselves. Although somewhat different, they were all used for the same reasons—–To mark the trail……to show the way……to guide.  There is one symbol that is universal. A dot surrounded by a larger circle…….This trail marker means “End of Trail–Gone Home” Some feel life itself is best described as a trail, for it has a beginning, and end, and many turns and bends along the way…..Life is funny in that way. This fb “ʘ” page is dedicated to those Members of our Group who have reached the end of their trail, and have gone home.

It has become traditional over the past century for scouts who pass away to have been described as “gone home” this is shown using the native american tracking sign below. 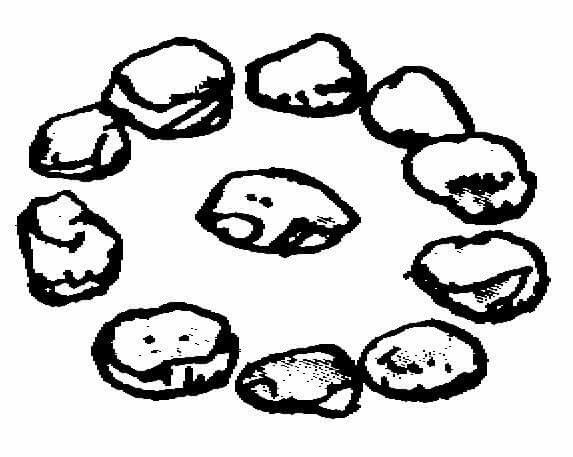 HOW TO OBSERVE SCOUT SALUTATION DAY

The anniversary of a death can be a time for quiet and simple contemplation, or for family gatherings, fellowship and remembrance. Whether you feel it’s significant to mark your loved one’s life on the anniversary of their death, or an occasion such as their birthday, the way you choose to acknowledge the death of a loved one can change with every passing year. Sometimes also known by people who’ve been bereaved as a ‘sadiversary’ or ‘angelversary’, there are many things to do in memory of someone who has died as a scout Hero. Here’s how to acknowledge the anniversary of a death.

God seems to have a chosen way of taking those so young into his hands to walk with him, yet leaving their lives undone.

To us it seems so selfish yet we try to think of hope, sometimes all that we can do is remember, cry and cope.

God had a plan that chosen day and took time to prepare, a way that he could take that life, yet be thoughtful, just and fair.

Although our thoughts are of him still, we think of days gone by, he’s walking now with God you see, in Valhalla way up high.

He helps in ways he learned through us, he shares our ways and dreams. God knows his choice was the perfect one, but only Brent knows what he means.

There’ll be a day for all of us when our judgement day arrives, we’ll stand before that mighty man who created all our lives.

He’ll welcome us with open arms, he’ll have all he needs to know, “Scouting molds a fine strong man, Brent Markos told me so”.

So if you dream of what’s up there in that world away so far, there’s someone who’ll remember you, and has told him who you are.